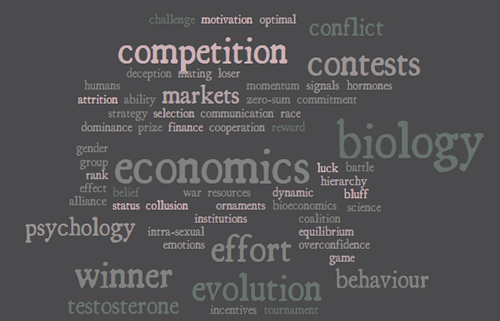 Economics and Biology of Contest

Both Economics and Biology have a rich history of analysis of contest behaviour in various environments. The beginnings of this analysis in Evolutionary Biology dates back to the work of Darwin in the mid to late 19thcentury, while the economic study of contest behaviour has origins that are more recent, dating to 1970s. Since then, however, analysis of contests has attracted considerable attention in a wide range of applications, such as mating strategies, sports contests, R&D races, promotions, political campaigns and military conflicts.

While the ground being explored is common, the economic and evolutionary approaches are rarely reconciled. Particularly, the concepts of fitness/reproductive success and utility, which lie at the heart of evolutionary biology and economics, have not been unified across the disciplines. Fitness provides a basis for the emergence of traits and preferences, while in an economic utility framework they are assumed. Individual behaviour in various contests environments provides a fertile area to build a bridge between these concepts.

In February 2016, Brisbane will play host to an exciting gathering of economic and evolutionary thinkers who will explore the potential for a closer synthesis between evolution and economics in order to understand both the economics and biology of behaviour in contest.

The conference aims to bring together leading economists, psychologists and evolutionary biologists to explore contest behaviour in economic, political and social environments. The conference will provide an opportunity for researchers to discuss the economic, psychological and evolutionary biology approaches to this topic, explore common ground and identify collaborative opportunities.